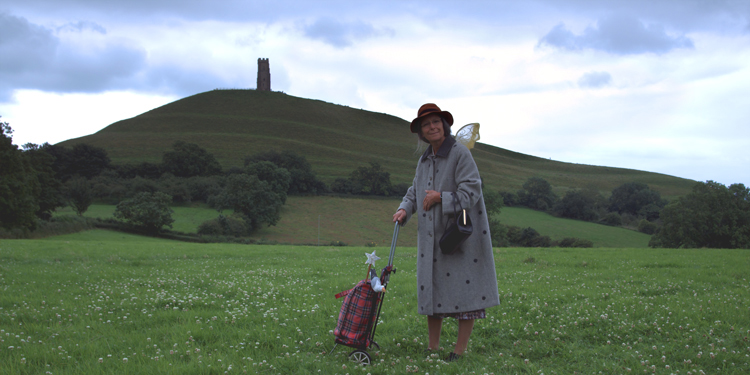 She is a gentle woman of pensionable age with simple charm, an old-fashioned coat, a brightly coloured hat and for many years no-one knew her first name. Yet Miss Smith has taken the world by storm.

Miss Smith is the focus of 80 paintings by Glastonbury-based artist Diana Milstein.

It was in 1994 that the painter and printmaker was “just doodling” and down on the page appeared Miss Smith.

An everyday woman, others have described how we could all walk past Miss Smith in the street without giving her a second glance.
Click here!

“Everyone knows Miss Smith although to them she will have a different name,” said Diana.

However this particular woman-of-a-certain-age became extraordinary when an angel touched her at a bus-stop, granting her unexpected reserves of passion and energy.

Suddenly Miss Smith sees magic in the mundane and gains an interest in the alternative.

In the following 80 paintings, which she describes as a moment in the life of Miss Smith, Diana Milstein has captured the essence of the character, while reminding us all that at times we should simply stand and stare.

In fact that is exactly what she does, on a beach, in Miss Smith Stands In Awe.

In others Miss Smith gets lost in the mists of Avalon, while another sees her hugging trees and one shows Miss Smith losing her way, but finding the Tor.

In many, Miss Smith is taking part in her adventures with her old friend the angel who she appears to tango with in one as she retrieves the passion of her youth.

All show a glimpse of her trademark sensible hat or ubiquitous handbag.

During Somerset Art Weeks Miss Smith could be found sitting in an armchair with a cup-of-tea in her hand and it was possible to get a glimpse inside the famous black handbag, something Diana says is a real lure for children.

“I love it when people really get Miss Smith, I’ve had people tell me sometimes they’ve looked at her and it’s made them weep,” Diana said.

The series of paintings has earned Diana Milstein the soubriquet of being Glastonbury’s most successful artist.

And now Miss Smith is getting an even bigger audience, thanks to the publication of a new book.

The award-winning eco-publisher Wooden Books, also based in Glastonbury, has this month published Glastonbury’s Original Miss Smith Postcard Book, with 22 of the paintings included.

“I am thrilled with the postcard book, which is published with vegetable dyes on recycled paper,” she said.

“It is good timing with Christmas around the corner, for the postcard book to go on sale nationwide.”

Miss Smith appeared in the flesh for the first time this year, when Diana did a stand-up show at the Glastonbury Goddess Conference.

“I had made her coat, her hat and her handbag but for the stand-up show I had to decide what kind of accent she was going to have,” she explained.

“I realised then that she was a bit down-trodden with an accent that spoke of faded glory.

“Before she was touched at the bus-stop by the angel she definitely had a mundane life, but since then she has really woken up.

“Art is a bit of a passion of hers now. She does lead a solitary life but some of the paintings show her dogs. A cat appears too.

“She definitely would not like modern technology. She is more of a candle and hot-water kind of person.”

Whatever else has happened in this ordinary woman’s life is up to the beholder’s imagination.

Diana revealed that for a long time she had been searching for Miss Smith’s Christian name. “It wasn’t until I had put on the outfit and I imagined her walking on stage that I suddenly found her introducing herself as Dotty Smith,” she said.

“Which considering she has this coat with dots all over it, was absolutely right. So her name is Dorothy. Dorothy Smith.”

Glastonbury’s Original Miss Smith Postcard Book by Diana Milstein, priced £9.99 and published by Wooden Books, is available from bookshops in Glastonbury as well as www.woodenbooks.com and other websites including Amazon.

Other postcards are available in Glastonbury shops.